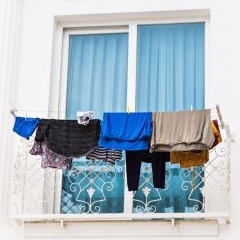 The linen hanging off the balconies, terraces and windows in the condominium, is often a source of quarrels.

In the relationships between condominiums, it takes little to trigger violent quarrels, and sometimes very trivial issues turn into real tragedies.

Just think about what happened a few days ago when a fight over clothes hanging out from the balcony had its epilogue in a blood: the clothes hurt and dripping squeezed have pushed a man to pull out his gun caliber 7.65 to “take out” his neighbor.

What does our order say about clothes hanging?

Generally the condominium regulations that give indications about it, especially in order to safeguard the aesthetics and the decor of the building but also to avoid the emergence of disputes between neighbors.

In some cities then, municipal regulations expressly forbid to hang clothes out of windows overlooking public streets in order to preserve the public decor or, more softly, they limit themselves to the same purpose to circumscribe the possibility of slamming and exposing the laundry at certain times of the day.

In the absence of condominium regulations or urban police, it must first be considered that in general the laying of clothes on a condominium balcony “noting in a material work but in a behavioral activity that is occasionally made, can not be considered as an element of disfigurement of the architectural decoration, for which it is required precisely the fulfillment of material works suitable to permanently modify the structural lines of the building” (Practical manual of the new condominium, Maggioli Editore, 2013, p.335).

Despite this, it is not possible to act in a completely uncontrolled manner and there are, however, rules to be respected which, if violated, make legally improperly impregnating a behavior detrimental to the rights of others.

Just look at what the article 908 of the civil code says.

This rule, in fact, governs the discharge of rainwater, sanctioning in the first paragraph that “the owner must build the roofs so that the rains run on his ground and can not drop them in the bottom of the neighbor”.

It is precisely article 908 which, in some cases, made the conduct of the neighbor extending his clothes without having squeezed them out for good, causing them to drip on the balcony of the condominium who lives underneath him. .

In this regard, with the sentence number 7576 of May 28, 2007 the Court of Cassation even claimed that the “dripping, both of rainwater, and, and even more so, those coming (more frequently) from the exercise of human activities, such as those deriving from the use of clothes by means of extruded prostheses on the alien bottom (practices involving also limitations of air and light on the underlying property), to be legitimately exercised, must necessarily find specific correspondence in a constitutive title of servitude hoc or, in any case, when connected to the construction of a balcony jutting out over the area owned by the neighbor, be explicitly provided for in the faculties of the real estate law“.

Given, in short, that there is no general right to drip the clothes at the bottom of the neighbor, such a faculty (to want to be rigid) for jurisprudence can be exercised only by granting a special servitude and, we add, in absence of local police regulations of opposite sign.

The clothes hanging in the condominium spaces.

More recently, the Cassation, intervened on the matter that saw two housewives from Brescia lined up against each other, has established that the washed clothes can be spread in the condominium spaces, provided that they are “squeezed” well to prevent them from dripping in condominium (see Cassation No. 14547/2012).

How to protect yourself in the event of prohibited conduct.

What can you do, in short, if you suffer from the inconvenience of the neighbor’s conduct that lays down the laundry in an inappropriate manner?

In the event of an overdraft and in the absence of servitude, it will be possible to resort to Article 908 of the Civil Code, initially limiting itself to distrust the condominium from continuing with such conduct.

However, when the next-door neighbor persists in his behavior, it is possible to go ahead and sue him in court to order the removal of the “annoying” clothes-line.

The related action, as promptly clarified by the aforementioned sentence number 14547/2012 (which recalls the previous Court of Cassation March 30, 1989 No. 1561 and Court of Cassation December 6, 1978 number 5772), must be identified in the actio negatoria servitutis.

In fact, “the action with which the owner of a terrace asks for the removal of a drying rack, located in the neighboring building and projecting onto the terrace itself with consequent inputs (in this case,” dripping cloths and shadow creation “), must be qualified as a negatoria servitutis, pursuant to Article 949 of the Italian Civil Code, implying the facts put into effect by the neighbor the affirmation of a right of a real nature on the terrace, whose exercise for the time prescribed by law could entail the purchase for usucapione of servitude“.

In this regard, it is recalled that article 949 of the civil code states that the owner can take legal action to declare the non-existence of rights that others claim to have on his thing, when he has reason to fear injury.

If then there are also disturbances or harassment, the owner can ask that the order be terminated and that those who put them in place are condemned to compensation for damages.

When, then, there are condominium or municipal regulations that expressly regulate this matter, limiting it or prohibiting it, the holds to be able to “defend” are certainly more numerous and more solid.

When the Municipality imposes the prohibition, it will even be possible to contact the municipal police directly to demand compliance with the regulation, regardless of a real nuisance suffered.

Finally, in some cases, which however we could call extremes, spreading the clothes in an uncontrolled manner, without wringing them properly could even take on criminal importance.

The penal code, in fact, in article 674 punishes with the arrest up to a month or with the fine up to two hundred euros the person who throws or pours in a place of public transit or in a private place but of common or of others , things designed to offend or dirty or harass people.

Considering that some years ago the behavior of a man who pretended to water the plants to throw water in the neighbor’s property (see Cassation May 28, 2014 number 21753) was considered suitable to integrate this behavior, the step for to consider criminally relevant also to make excessively dripping the clothes hanging on the balcony of others is not so long to do!

In any case we must never lose sight of common sense and mutual respect: on the one hand, having the foresight to spread their clothes in the most discreet way possible, on the other tolerating discomforts that do not degenerate into real and unbearable discomforts .