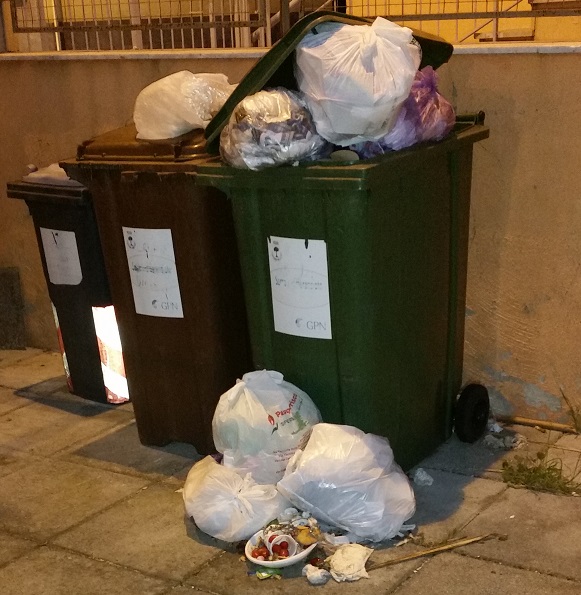 Correct delivery of waste in the condominium parts.

One of the many problems that door-to-door separate waste collection “has brought” (let yourself play with words) to apartment buildings concerns the keeping of the common parts; in particular, here we refer to the cases in which some condominium does not correctly confer the refusal leaving it out of the dumpster and this creates aesthetic and health problems; think of the widespread practice of those who leave the waste out of the bin, because it is full or because the waste is too large.

In fact, not all of them comply with the conferment rules, this is known. If the cause of this behavior does not always depend on the condominiums alone, because e.g. often the bins delivered to the condominium (which, moreover, are sometimes subject to theft!) are not sufficient or the frequency of collection of the refusal is not adequate, the fact remains that some condominiums do not behave correctly.

Thus, it can take a few days for the part dedicated to the arrangement of the bins to take on the appearance of a small open-air landfill.

Follow the complaints of condominiums to the administrator, such as the risk of penalties against the entire condominium. What can our hero do?

Yes, because sometimes it really seems, referring to the various “adventures” that the administrator may come across, whether he wants it or not, to be talking about one of the (many) heroes of our daily life.

The problems that arise are various: what are the legal responsibilities in this case? What can be done to satisfy the requests of condominiums who dispose of correctly? How to spot outlaws?

Wrong transfer in the common parts: the legal responsibilities of the condominium.

Let’s start from the possible legal consequences that the condominium faces in case of disposal outside the bins. We refer to the most striking cases in which it takes on important dimensions.

First of all, we remind you that the Environmental Code (Legislative Decree no. 152/2006) prohibits the abandonment of waste and provides for fulfilments and sanctions.

Articles 192 and 255, Legislative Decree no. 152/2006 provide for obligations for both parties, the one who abandons the refusal and the owner (or holder of the real right) of the area. Those who abandon the refusal are in fact “required to proceed with the removal, the start of recovery or the disposal of waste and the restoration of the state of the places jointly and severally with the owner and with the owners of real or personal rights of enjoyment on the area, to whom this violation is attributable as willful misconduct or fault, based on the assessments made, in contradiction with the interested parties, by the persons in charge of the control.

The Statutory Auditor ordinarily arranges the operations necessary for this purpose and the deadline within which to proceed, after which he proceeds with the execution to the detriment of the obliged parties and the recovery of the advance sums “(art. 192, co.2). 255, in turn, provides for a pecuniary administrative sanction for those who abandon the refusal and arrest for up to one year for those who do not comply with the order of the Mayor; moreover, it is foreseen that in the sentencing sentence or in the sentence issued “su request “pursuant to article 444 of the criminal procedure code (the so-called plea bargain),” the benefit of the conditional suspension of the sentence can be subject to the execution of the provisions of the ordinance referred to in article 192, paragraph 3 “(see art. 255 cit.).

The municipal regulations are added to the Environmental Code, which indicate the methods for the correct conferment of the refusal and provide for penalties for non-fulfillment: these rules also concern, as far as we are concerned here, the conferment inside the bin.

The risk of sanction occurs both when the waste is placed inside the condominium and, even more, when it is moved to the public area to be collected, if placed in the same outlawed state in which it is placed inside.

Not to mention the responsibilities that may derive from the exhalations of odors not kept under control because they are placed outside the bin: in this case, the application of the rules on intolerable immissions (pursuant to art. 844 cc) and on the dangerous throw of things ( ex art. 674 of the criminal code).

What can / should the administrator do to resolve the situation?

Certainly his intervention is necessary; in fact, his duties include that of: “2) regulating the use of common things and the use of services in the common interest, so that the best enjoyment of each of the condominiums is ensured” and “4) carrying out the acts conservatives relating to the common parts of the building (see art. 1130 cc).

Certainly it will e.g. post a notice on the bulletin board or in other common areas that warns condominiums to comply with the rules for the correct delivery of waste. Unfortunately, as experience teaches us, it will hardly bring results.

He will also be able to evaluate whether to request the delivery of some extra bins.

The real obstacle will then be to discover the outlaw. A typical solution is the affixing of cameras, a decision that requires approval “with a number of votes representing the majority of those present and at least half the value of the building” (see Articles 1122-ter of the Italian Civil Code and 1136 co.2 of the Italian Civil Code) and which, however, is not always accepted by the condominiums, mainly for reasons of cost and privacy.

It may be proposed to insert a clause in the contractual regulation which, once the manager has been identified, provides for the possibility of imposing a sanction pursuant to art. 70 Disp. att. and trans. commercial code .; but in reality, if the offender was known, it would be sufficient to charge him for the costs of the restoration and any other damage caused.

If the behavior persists, it is possible to consider reporting the offense to the competent authorities; hoping that the same announcement of this intention made to the generality of the condominiums can act as a deterrent.