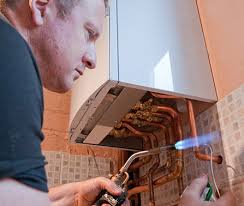 We begin to see what are the main points related to the installation of a condensing boiler, also referring to the current regulatory regulations, proposing three main issues that whoever installs a new boiler is usually to sift.

Commercial boilers, as well as for many other factors, differ in the way the air used in combustion is recovered from the environment.

There are two types of boilers: the “open” and the “watertight” ones.

When it comes to “room” we refer to the combustion chamber, that is to the compartment where a part of the mixing between the air and the combustible gas and then the generated flame occurs.

Open-air boilers are characterized by retrieving the air in question directly from the environment where they are placed, through a natural draft using special openings on the boiler.

This solution, though constructively simpler, has the great disadvantage of burning the air in the environment, thus becoming dangerous in the case of unevenly-inhabited environments.

For this it requires particularly ventilated environments with large aperture for air exchange. In addition, it is necessary to have an exhaust pipe outwards to evacuate the combustion fumes.

The regulations that regulate the installation are particularly severe and often lead to considerable difficulties.

For this reason, this type of boiler is almost always installed outside the home, for example on balconies, places where air exchange has no problems.

On the contrary, the water-based boilers recover the combustion air through a forced draft, which uses electric fans or equivalent devices, and forces the air through a special conduit that opens outwards.

In this way, these boilers avoid using the air of the environment for combustion, and therefore have no problem to be used even in small, inhabited and poorly ventilated environments.

Such boilers also exhale combustion fumes outside, by means of a special conduit which generally uses the same passage of the pipe that recovers the outside air.

It is important to note that all condensation boilers are watertight boilers.

They therefore have no “contraindications” to be used in any kind of environment where it is possible to reach a duct for the passage of the two air supply pipes and exhaust fumes.

Consider also the fact that a traditional open-air boiler installed inside requires in any case a passage for the exhaust pipe and that a condensing boiler uses the same air passage for the air recirculation tube without requiring therefore, for this particular function, a further installation work.

Not too often, whenever possible, you prefer to install a boiler outside the living spaces.

The reasons may be different but the most common one is the need to save space. A boiler, however miniaturized, always occupies space that is subtracted from other possible uses.

In other cases, there are different reasons, such as the need to use an existing plant that had been designed for the use of a boiler outside.

In this regard, both for condensation boilers and for traditional boilers, it is very important to note that installing a boiler outside requires the use of a boiler specially designed to operate in “external” environments.

These conditions show the presence of environmental agents that attack the various parts of the boiler much more drastically than in a closed environment.

For this reason, outdoor boilers are designed to withstand agents such as dust and sand, water and wind and frost, using a cloak without cracks, which makes them immune to rust and prevents the interior from being reached dust, wind and frost.

With regard to the latter, for example, a modern outdoor boiler, thanks to special protection systems, can operate smoothly at temperatures of -15 degrees, which might instead blow up the water pipes of an internal boiler or in any case would seriously compromise its operation.

But even without getting to these extreme conditions, it has now been proven that an interior boiler used outside has a much shorter operating life than the one designed by the manufacturer.

If we consider that the average life of a boiler in general, in our case for interior, is about 20 years old, it is easy to understand what has just been said, if it is thought that the same boiler, used outside, often does not exceed 10-15 years.

This does not mean that you can not use a boiler for indoor use outside. There are situations where this eventuality arises.

In these cases, however, the boiler must be placed inside a covered cover, which protects it from external agents.

What, in fact, in many installations and species in single-family villas, does not actually happen.

It is not unusual to find boiler installations designed for the interior, but used outside and without proper protection.

These boilers are designed for a short life and an inefficient operation, which not only rarely reduces the performance and therefore increases fuel consumption.

The first one is to discharge the fumes immediately above the boiler, where possible, or near it, through a wall.

The second uses an exhaust pipe that reaches up to the roof of the building where the boiler is installed.

With the third it is meant to discharge into a chimney that also accommodates the smoke of several devices, as can, for example, happen in a condominium, bringing them here also, above the roof of the building.

The possibility of adopting a solution rather than another, as well as with technical issues, must of course make the bill under the current law.

At present it is governed in particular by Law no. 90/2013, which entered into force on 4 August 2013. This Act partly modifies the previous provisions in three main areas:

1) the obligation to unload the roof is also extended to buildings made up of a single real estate unit, such as family villas, while the former concerns only multi-unit buildings

2) even for condensing boilers, wall discharge is only foreseen in three specific cases:

a) when replacing an existing installation prior to 1 September 2013 already equipped with a wall outlet or collective flue;

b) in particular for historic buildings, when roof drainage is incompatible with the protection of the building;

c) when the designer through a specific assertion demonstrates the impossibility of different solutions.

3) in any case, the wall outlet is only permitted for the three situations just exposed and only for the installation of a Class 4 and 5 star boiler (according to the relevant European standards).

However, there is no longer a requirement for the choice of condensation type only, although the Ministry of Production Activities, which specifies the minimum boiler performance requirements, must be considered in this regard.

What it tends to orient the choice of condensing boilers, these being the ones that guarantee the highest energy efficiency.

Lastly, it should be noted that in cases where a collective smoke can already exist in a building, its use to discharge the fumes of a condensing boiler is only foreseen in cases where the chimney has been specially constructed for the passage of fumes of condensation.

This is because such fumes are more acidic and therefore more corrosive than traditional boilers.

In fact, this does not prevent the use of a conventional flue with a condensing boiler, since it is sufficient to pass plastic tubes, such as PVC, into the canal duct until it reaches the roof outlet.

This is generally done by a competent installer without any difficulty.