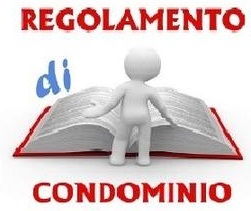 Article. 1138, first paragraph, of the Italian Civil Code requires condominiums with more than ten co-owners to adopt a regulation.

Therefore, eleven is the reference number: eleven condominiums, that is eleven distinct owners of real estate units. If two or more people are co-owners of an apartment, they count as one for the purposes of the calculation in question, on the other hand, at the shareholders’ meeting only one can give voice to the interest of the group.

This, therefore, is the first rule regarding regulations: adoption is mandatory only if a certain threshold is exceeded, in other cases it is optional.

What is the condominium regulation?

What is it for?

How can it be approved?

Who is required to respect it?

What are the majorities for its modification?

These are the most frequently asked questions on the subject.

First of all, by answering the first question, it is possible to say that the regulation is a sort of internal statute to the condominium which serves to regulate, using a generic term, the management of the common parts.

Statute, as the scholars and jurisprudence who have ventured in the definition of this document expressly say, stating that “the condominium regulation, what its origin and the formation procedure are (acceptance by the individual buyers of the condominium real estate units) of the regulation prepared by the original sole owner of the entire building or resolution of the assembly of condominiums voted with the majority referred to in art.1136, second paragraph, cc), is configured, in relation to its specific function of constituting a sort of the conventional statute of the condominium, which governs its life and activity as a management body (without prejudice to the mandatory nature of some provisions concerning specific aspects of the legislative discipline), as an act aimed at affecting a conceptually unique “multi-subjective relationship” with a complex of legally binding rules for all condominiums “(Renato Scorzelli, Il regolame nt of condominium, FAG, 2007, in the sense conf. Cass. November 29, 1995 n. 12342).

In order to fully understand what a regulation is for, it is necessary, first of all, to distinguish between two types of regulation:

According to some, the possibility of reaching the adoption of a condominium regulation by judicial means remains.

The shareholders’ meeting, pursuant to art. 1138, first paragraph, of the Italian Civil Code it may contain exclusively “the rules on the use of common things and the distribution of expenses, according to the rights and obligations of each condominium, as well as the rules for the protection of the decorum of the building and those relating to the administration”.

To approve it, the favorable vote of the majority of those attending the meeting who represent at least 500 thousandths of the value of the building is sufficient.

It must be respected by all the condominiums and the obligation of respect also automatically extends to assignees and heirs (art.1107 of the Italian Civil Code)

The contractual regulation, on the other hand, in addition to respecting the minimum content envisaged for the shareholders’ meeting, allows the adoption of further rules, and in some cases derogations, with respect to the provisions of the law; in the same way, it will be lawful to introduce limits on exclusive property rights.

The classic example, for the first case, is that of derogations from the distribution of condominium expenses. Thus a contractual regulation may provide that the costs for the maintenance of the stairs must be divided into equal parts not on the basis of art. 1124 c.c.

For the limitations, consider the prohibition on allocating your property to an office, or to a bed and breakfast; before the entry into force of Law no. 220 of 2012, it was believed that the contractual regulations could contain rules that prohibited the keeping of animals. (e.g. Piacenza Court n. 527/2016).

To be valid, the contractual regulations must be signed by all participants in the condominium or at least accepted by all through an express notice contained in the deed of purchase.

The jurisprudence of the Court of Cassation has underlined that once the first sale has been made, if the regulation, already accepted, is also transcribed in the public real estate registers, then it will be valid for all subsequent buyers, regardless of its acceptance. The transcription, in fact, makes it enforceable against third parties (Cass. 17 March 1994, n. 2546). In order to be binding, the transcription must concern the specific clauses limiting the rights, with specific mention of the same in the so-called transcription note (Cass. July 31, 2014 n. 17493).

For the modification of the first nothing quaestio: the clauses can be modified with the same majorities provided for the approval.

For the second case, until 1999 the situation was doubtful.

The Court of Cassation, intervening to resolve an interpretative conflict that arose in relation to the binomial origin of the regulation – modification of the same, has shifted its attention from the origin of the document to its nature, or better yet to the nature of its clauses.

In this context, the United Sections of the Supreme College have stated that: «the contractual terms of the regulations are determined exclusively by the clauses limiting them of the rights of the condominiums on the exclusive properties (prohibition to allocate the property for radiological studies, for clubs etc. .) or common (limitations on the use of stairs, courtyards, etc.), or those clauses which attribute to some condominiums greater rights than the others (sent.nn. 208 of 1985.3733 of 1987.854 of 1997). Therefore the regulation prepared by the original, sole owner or by the condominiums with totalitarian consent may not have a contractual nature if its clauses are limited to regulating the use of common goods even if they are immovable “(so Cass. SS.UU. 30 December 1999 n. 943).

Ultimately, while a shareholders’ meeting regulation can never be contractual, the latter in relation to the content of its clauses can have that nature.

This means that even the contractual regulation in some of its clauses (or in all according to their nature) can be modified with the majorities required for the modification of the shareholders’ meeting.

If it comes to the modification of contractual clauses that were the subject of transcription, for their enforceability to third parties it is necessary that the modification, or the new clause, is also subject to the same procedure.