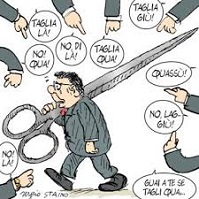 How to save money in the Condominium

The moves to lower costs

Families make it increasingly difficult to pay the expenses of the condominium.

The crisis has increased the number of those who escapes to the payments already in 2009 was 20% compared to 10% of the normal time.

The non-payment does not concern only the poor neighborhoods, condominium debts grow even in neighborhoods considered wealthy: it is areas where valuable properties, with high maintenance costs and condominium units are located, which are a challenge to the current owners, who still live in the old family home, but they realize that they can not rely on the same standard of living enjoyed by grandparents and parents.

The cuts that lower the rate of the apartment building

maintenance Arried out annually routine maintenance avoids salty extraordinary expenses to be paid all at once. 20% on costs

For the final works Energy

efficiency The systems that prevent dispersions, such as new fixtures or coats for thermal insulation, break down the costs. 30-35% on energy costs ON HEATING System

central The detachment from the central heating to switch to an autonomous management of radiators is one of the very best practices to save on condominium installment. 30-35% on energy costs ON SERVICES Compensation administrator Treatment of ordinary and extraordinary administrator fee to be defined at the time of appointment and / or reappointment Art. 1129 c.c. 10-20% on the fee administrator Internet in common Some providers offer the ability to share the internet 20-40% on your bill

The classic cut is the cost for cleaning of common areas and maintenance of the green.

For those involved in the matter, however, this is not the way that saves more.

On top of the cuts that really give “satisfaction” there are other items such as those for energy and those for the building administrator.

Article 1129 of the Civil Code He reads: “The administrator when accepting the appointment and renewal thereof, shall specify in detail, under penalty of nullity of the appointment itself, the sum due as compensation for their work,” which can be treated in parts.

Under 8 apartment buildings is not necessary to have an administrator and many buildings have started to practice it yourself.

But be careful to errors that are likely to become very salty.

For this there are insurance policies that protect you from unpleasant eventualities but which are also fine to protect themselves from trouble caused by your professional, the most classic is the escape with cash (increasingly frequent).

In recent years they have then made off even new sources of spending condominium review: there is, for example, those who exploit the latest technology to share with other residents the cost of the Internet connection.

A scenario that in some of the latest generation buildings is already a reality.

Alternatively it comes to trying to market those providers who can provide more bandwidth to the building.

The savings on the bill is significant and can be up to 40% of the annual amount to be paid for the network or for fixed telephony.

The real savings, however, concerns the property.

The energy optimization, through suitable isolation systems or with more modern systems of fixtures, can lead to a significant cost-cutting; Furthermore you can also reconsider the central heating to switch to a setting with an independent accounting.

It ‘also important to think about the routine maintenance as a form of savings.

Many think nothing but leave behind interventions regular maintenance and care can lead to extraordinary costs to be borne all at once that end up bankrupting the accounts of the condominium.