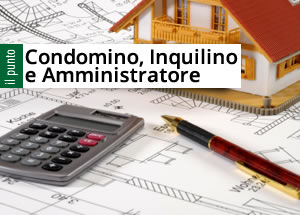 The role of the administrator on lessees.

The collection of service charges. Division of expenses.

The condominium building manager is the representative of the owners and is therefore held accountable for their actions only to them and not even to tenants.

It ‘absolutely appropriate to highlight the fact the lease, being a mandatory report, only binds the parties (art. 1372 cc) and not the third as the administrator, which is totally alien to the relationship between landlord and tenant.

This means that he has the obligation to apply to condominiums to meet expenses even if the housing unit has been leased. It is not for the administrator to provide to redistribute between condominium and tenant, unless that task is delegated by the owner of the property. In this case the task of distribution is, however, free transfer from the mandate to administer and there is no content, with the result that the administrator may request a further fee for this activity. And ‘But the fact that even in this case, if the tenant fails to timely payment of expense allowances provided against him by law or by contract, the condominium-lessor must intervene to avoid be defaulting with the condominium .

And ‘correct to assume that the administrator is obliged to request the charges directly to the conductor, where there is an agreement with the landlord? It can be considered that such an agreement is determined from a practice followed for a certain period?

“We can not recognize contractual links in mere practice or customary Administrator condominium that caters as a priority to tenants (and not to condos landlords) for the payment of service charges” (Cass.13-9-2006 n.19650 ).

Not surprisingly, the Supreme Court, in several earlier decisions, shares the view that “the law n. 392/1978 (so-called fair rent) govern the relationship between landlord and tenant, not innovate in relation to the general rules on condominium buildings, so that the administrator has the right • Under the combined provisions of Articles. 1123 cc and 63 disp. att. same code – to collect the contributions and expenses for maintenance of common things and services in the common interest directly and exclusively by each owner, to the exclusion of direct action against the conductors of the individual units (against which may instead act resolution in the lessor pursuant to art. 5 of law no. 392/1978 for the non-repayment of related charges), also with regard to the costs of the joint service heating even if the latter have the right to vote, in place of the condominium owner, in shareholder resolutions regarding its management “(Cass., January 12, 1994, n. 246; Cass. February 3, 1994, n. 1104; Cass, 28 October 1993, n. 10719; Cass.14 July 1988, n. 4606.)

In fact, art. 10 of the Act fair rent – that, essentially reiterating the rules already introduced by art. 6 of the law 22 December 1973 n. 841, provides for an exception, a hypothesis of the legal replacement of the conductor to the owner in the assemblies of condominiums convened to deliberate on costs and providing for the management of the heating services and the air- conditioning did not involve amendments to the provisions of Article . 66 disp. att. Civil Code, which governs the disclosure of the notice of meeting of condominiums, with the result that such notice must be given to the owner and not to the tenant of the apartment, remaining just the same owner must inform the tenant of the opinion notice of meeting received by the administrator, without the consequences of not meeting the conductor may be falling back on the condo, which remains alien to the lease (Cass., April 22, 1992, n. 4802; Cass., Oct. 3, 2005, n. 19308).

It follows that the administrator has no obligation to perform cumbersome breakdown of the various costs of building between landlord and tenant – possibly trying the solution to their dilemmas in allocation tables approved from time to time by the trade associations – remaining a burden of the parties the specific conferring lease term for the distribution and collection of service contributions in accordance with agreements reached between the parties.

E ‘, therefore, the owner that the administrator must always turn to the requests for payment, also for heating or air conditioning service, in that any vote at the tenant must always be understood and only in place owner, who is responsible for the design right by law.

Moreover, a possible agreement for the application and collection of service charges directly against the tenant presents considerable difficulties.

First, the mechanism provided for by article 9 L.392 / 78 would be undermined, as would the administrator (foreign entity) to demand payment of the charges, probably without having to meet deadlines provided in article 9 L .392 / 78.

Secondly, any agreement should be trilateri, that includes the agreement for the direct collection should be concluded between the administrator, the lessor and the lessee, and should also include the overcoming of article 9 requirements.