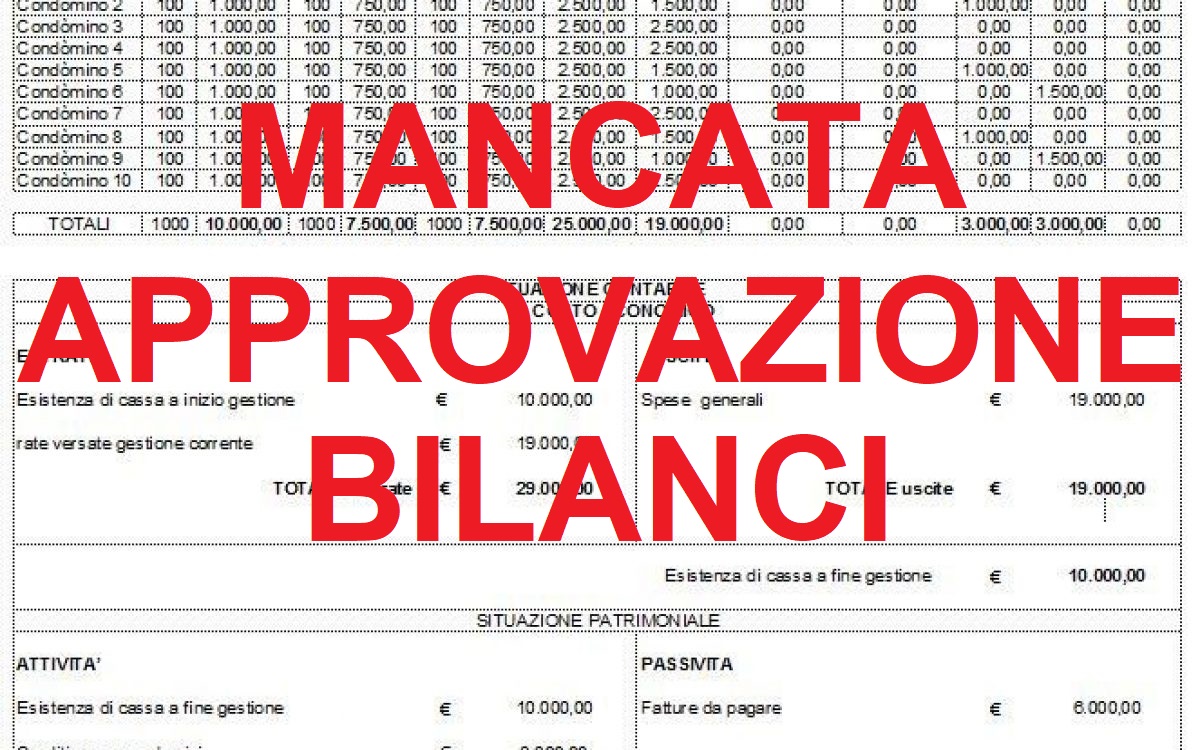 Consequences of the non-approval of the financial statements.

Consequences of the non-approval of the financial statements .

What happens if the assembly does not agree to the budget or the final balance presented by the administrator?

Estimate and final balance are two accounting documents whose preparation is the responsibility of the administrator and which must be approved by the assembly. They are of fundamental importance for the management of the condominium and, although connected, they have different functions.

The estimate is the tool through which the administrator asks the condominiums to pay in advance the sums necessary for the management of the common parts, or to face the costs of ordinary and possibly extraordinary maintenance, as well as for the condominium services.

The administrator therefore draws up the document in which he indicates the sums he deems necessary to effectively carry out the condominium management and asks the assembly for approval.

The annual frequency of the financial management of the condominium is provided directly by law (articles 1135, paragraph 2, n. 1, cc and 66, paragraph 1, Act. Act. Cc).

Pursuant to paragraph 1, no. 10, of the art. 1130 cc . the administrator must then return the annual accounts of his own management, calling the meeting for this purpose within 180 days. Also in this case, as required by art. 1135, paragraph 1, n. 3, cc, it is the assembly that must approve the director’s annual report.

The report is certainly one of the most important obligations of the administrator towards the condominium, as it represents the tool through which the condominiums are made known how the sums they have made available for management have been used. condominium.

The administrator, if requested by the condominiums, must also make available to them the documents relating to the disbursements incurred during the year and indicated in the final balance (the so-called supporting documents).

In fact, as provided in general for the mandate by art. 1713 cc whoever manages another’s property has the obligation to report, having to give the principal an account of his work and remit him everything he has received as a result of it.

The approval of the report by the principal therefore has the function of certifying the fulfillment of the mandate by the mandate contract and attributing certainty to the accounting balance, which thus becomes the object of an obligation by one party to the other, in the sense that from Approval of the account of an administration activity may give rise to obligations of payment and / or delivery of assets acquired or instrumental to the administration, to be borne by and in favor of each of the parties.

Failure to approve the final balance and / or estimate.

Due to the different function performed by the aforementioned accounting documents, it is obvious that the consequences of their lack of approval by the shareholders’ meeting are also different.

Let’s start for simplicity with the hypothesis of the non-approval of the final balance sheet. In this regard, it should be specified that this circumstance can substantially occur for two reasons.

In the first place, it may be a simple hiccup, where the assembly lacks the numbers to proceed with the approval of the accounting document.

In fact, although a simple majority is sufficient for the approval of the final balance and the budget, therefore the favorable vote of the majority of those present at the assembly representing at least 1/3 of the thousandth value of the building, it may also happen that at the meeting no there is a number of condominiums such as to reach said quorum.

In this case, as mentioned, it is simply an isolated episode, which can be easily resolved with the convocation of a new assembly, in which to collect the number of votes necessary for the legitimate approval of the final balance.

It is in fact evident that a final balance approved without the majority required by law would be voidable by condominiums who voted against and by those absent in the following 30 days, starting from the assembly for the former and from receipt of the minutes for the latter.

The second hypothesis, on the other hand, is more problematic, namely that in which the assembly, despite having a sufficient majority to approve the final balance, rejects the document prepared by the administrator. In this case, in fact, given the function of the final balance, which is essentially that of validating the management activity carried out by the administrator, it is evident that the lack of approval of it makes manifest the loss of that relationship of trust between the condominium and the administrator. , a fact that should lead the latter to resign or that should in any case push the assembly to appoint a new director (even if in this case, as is known, a qualified majority is required, i.e. the majority of those present representing at least 500 thousandths of the value of the building).

However, there is also the possibility, in the case of limited disputes, that the director makes amends and presents the correct report to a new meeting, which could then be approved.

Otherwise, if the administrator is replaced, the new agent is generally given the task of checking the condominium accounting and bringing a new accounting document to the examination of the assembly, without prejudice to any responsibilities of the previous administrator.

Even more complex is the hypothesis in which the assembly rejects the budget formulated by the administrator. Also in this case, the latter could still consider accepting the requests underlying the non-approval of the accounting document and present a different estimate in a new meeting to obtain approval.

Otherwise it is evident that the lack of an estimate seriously jeopardizes the possibility for the administrator to raise the funds necessary for the management of common goods and services. A buffer solution could be used.

In fact, jurisprudence admits that the assembly, pending the approval of the budget, may authorize the administrator to request provisional payments from the condominiums, subject to subsequent adjustment on the basis of the approved budget and taking into account the thousandth values attributed to each individual property (see on the point Civil Court, second section, March 27, 2003, n. 4531).

However, we need to get out of the impasse quickly.

This is why, without prejudice to the possibility for the administrator to renounce the mandate for just cause, the only possible tool seems to be that of the use of the condominiums to the voluntary jurisdiction pursuant to art. 1105, last paragraph, of the Italian Civil Code, for the request to the Court for a useful and necessary measure for the continuation of the annual management of the condominium.