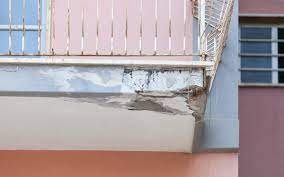 What if pieces of the balcony above fall down? Practical case and near tragedy.

What if pieces of the balcony above fall down? Practical case and near tragedy.

It is the phenomenon of the “breaking down” of the floors, very widespread and often neglected.

Nothing more beautiful at this time of year than to cool off on the balcony of your home, water the flowers, read a book or lie down and rest for a while. All the more so if the balcony is covered by the one above, which provides shade and shelter.

large piece of the balcony above fall to the ground a little further on . In reality it was “only” plaster, mixed with “shreds” of brick, with an estimated weight of about 80kg which, if they had fallen on her head, would have tanned it badly.

It is the chronicle – which really happened – of one of the many cases of “breaking down” of the brick floors which, more and more often, affect the buildings in which we live, especially those built a few decades ago. A very widespread and, unfortunately, neglected phenomenon.

The breaking of the floors

The breaking of brick-concrete floors (or balconies) is a phenomenon that affects the so-called brick pignatte which, due to stresses, deformations or degradation (due to humidity, infiltrations, freeze-thaw or other factors) break, depriving so the plaster or the false ceiling of the necessary support. As a result, more or less large parts can fall to the ground, endangering people and things .

Breaking down is a phenomenon that should not be overlooked since, once triggered, it can cause sudden detachments of the lower part of the floor whose weight, depending on the depth of the break, can reach up to 70kg / m2.

The case described in the introduction hides a condition of intrinsic and widespread danger.

First of all because most of the reinforced concrete buildings built between the 1940s and 1980s are potentially affected by the breaking down of the floors and, often, observing the ceilings of the external parts most exposed to atmospheric agents (for example the under balconies), typical cracks can be noticed, indicative of the triggering of the phenomenon.

Public buildings, schools in particular, in recent years, following a series of detachments that also caused serious injuries, have been sifted through by institutions and have been made safe, with the application of appropriate fall protection nets . For private buildings, on the other hand, despite being affected by the same risk factor, there are no regulatory obligations, other than those deriving from the civil code.

In the specific case of the “lucky” lady, numerous cracks in the plaster of the balcony had been observed in the months preceding the posting, but they had not been reported and therefore, little by little, the infiltration of rain and the consequent oxidation of the iron bars. reinforcement of the joists, had determined the detachment of the plaster which, with its weight, had also torn pieces of the brick “pots” inserted in the slab.

In the event that the breakthrough affects a balcony, in order to correctly frame the responsibilities, it is first of all necessary to understand if it is the exclusive property or if it is condominium.

If it is a “jutting” balcony , ie protruding from the perimeter walls, it belongs exclusively to the owner of the corresponding real estate unit. In this circumstance, in fact, “only the coverings and decorative elements of the front and the lower part must be considered common to all, when they are inserted in the façade of the building and contribute to making it aesthetically pleasing” (Cass. September 23, 2003 No. 14076).

It will, therefore, be the individual condominium to assume responsibility for the damages deriving from the omitted maintenance of the property, including that of the under balcony.

Be careful though. If the condominium becomes aware of potentially dangerous situations (such as the triggering of breakthrough phenomena for example), it will be required to request the intervention of the public authority (city police, firefighters, etc.) and may resort to judicial ways to obtain the final settlement.

The remedies against the phenomenon of the breaking of the floors are of various kinds.

Some are radical and involve the removal of degraded materials (due to the effect of humidity and the oxidation of the reinforcing bars), and the replacement with new products (usually glued polystyrene blocks), as well as with the application of a mesh of reinforcement and a subsequent layer of plaster. In this way the danger of detachment is eliminated and the original aesthetic conditions are restored.

In other cases, it is possible to intervene, provisionally, by applying visible nets which have the effect of retaining the pieces and therefore preventing them from overwhelming people or things when they fall.

As is now known, the Superbonus 110%, seismic version, presupposes the improvement of the static and seismic conditions of the buildings, but does not require the demonstration of any class leap, as is instead necessary for the ordinary Sismabonus.

It is therefore believed that even the anti-shattering interventions of the condominium floors are fully included among those admitted to the tax benefit of 110%, with a ceiling of 96,000 euros for each real estate unit.

Even the expenses for the local anti-shattering interventions of private balconies can enjoy tax incentives, but in this case the ordinary ones at 50%, and have their own autonomous spending ceiling equal to an additional 96,000 for each unit.