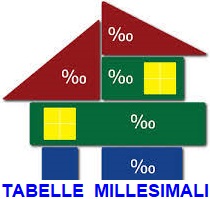 The thousandth tables represent one of those paradigmatic arguments for the condominium: an instrument of fundamental importance for its functioning, it is regulated in such a generic way as to seem almost barely mentioned.

The reference criteria for the formation of the thousandth tables or the majorities for their approval seem to be real taboos. Jurisprudence, as always happens when the legislation is deficient, has remedied by stating principles that seemed to have finally brought certainty about the topics mentioned.

The law n. 220 of 2012, known to all as a condominium reform, has only partially incorporated the law of jurisprudential approaches, thereby concluding that the principles expressed at the time by the United Sections (sent. N. 18477 of 2010, of which we will say later ) may no longer have value, at least in relation to the approval of the thousandth tables.

Only the presentation of the context in which we will examine the case makes us understand how uncertain the subject is. Let’s go by degrees.

The majority of the meetings are formed based on this value.

We are talking about the c.d. thousandth values ​​that are consecrated in an indispensable tool for the life of the condominium that takes the name of millesimal table.

In everyday life it is customary to speak of tables, since next to the main one the c.d. table of property, which expresses the value of the property in relation to the common parts, there are as many as there are shared services (eg stairs table, elevator, heating, etc.) whose function is to allow the sharing of expenses for the management and conservation of common things.

Before tackling the problems connected to this instrument it is worthwhile to state a certain thing: for the formation of the thousandth tables, it is not necessary to take into consideration the rental fee, the improvements and the state of maintenance of each floor or of each portion of the floor (art 68, third paragraph, disp. Att. Cc).

Millesimal tables, how are they calculated?

In the silence of the law on parameters, which, on the other hand, must be taken into consideration, it is useful to refer to a circular from the Ministry of Public Works (No. 12480 of March 26, 1966) which basically clarifies how the tables should be drawn up.

The basic parameter is the surface, ie the volume. The choice of one or the other is left to the evaluation of the technician called to draw up the tables.

If you choose the surface and the heights of the floors are different, a coefficient, called volume, will be applied. If the use of the volume is used these coefficients will be useless.

Calculate surfaces and volumes of individual rooms of the real estate unit, the technician will apply to them the reduction coefficients, which are various (destination, floor, orientation, elevation, brightness, overall functionality of the accommodation for mention the best known), whose function is to differentiate the characteristics of the individual rooms, so as to highlight their strengths and weaknesses. Once the total area or virtual volume of the real estate unit has been obtained, a simple proportional calculation will be carried out to compare the value thus expressed to a thousand.

The resultant will be the thousandth value of the single real estate unit.

Among the most recurrent questions that arises when analyzing the theme of the tables we also find these:

With regard to the first question it must be said, immediately, that the situation has been so controversial that the intervention of the United Sections has become necessary. The contrast concerned the necessity or not of the consent of all the condòmini for the approval of the tables.

The heart of the problem was the following: the thousandth tables are a store of ascertaining the value of the property of each one with respect to the common parts, and as such they need, to be approved, the unanimity of the consents of the condominiums, or simply represent a tool for the allocation of expenses and for the formation of the majority of the meetings?

The jurisprudence of merit and legitimacy, in a majority measure, tended towards the first solution.

The United Sections, with an articulated argument, have opted for the latter: the tables are not a verification shop, since they do not remove any situation of uncertainty, a typical function of this institution.

The tables are a mere working tool of the assembly, the calculation of which does nothing but make contemporary values ​​intelligible to the construction of the building.

Ergo: for their approval and revision the consent of all the condominiums is not needed, since they do not affect their rights, the approval by majority is enough, because they serve only to the management of the condominium (see Cassation SS.UU. 8 August 2010 No. 18477).

In one case only, unanimity is required for the approval of the thousandth tables: when they contain criteria for allocating expenses that deviate from the ordinary ones provided for by the law.

This is the meaning of the phrase “unless otherwise agreed” contained in art. 1123 c.c.

The modification of the art. 69 avail. att. c.c., of which we will say immediately afterwards, operated by the law n. 220/2012 has only partially incorporated the dictum of the United Sections, ie it has limited it to review.

This led to say that what was passed in 2010 in relation to the approval must be considered passed. Opinion this is not unanimous. This is enough to say that the risk of a new period of uncertainty is very high.

What happens if a condominium realizes that the thousandth tables, which are said to comply with the criterion of proportionality provided for by the law, turn out to be incorrect?

The normative reference, which we report in full is the art. 69 avail. att. cc that reads:

«The proportional values ​​of the individual real estate units expressed in the thousandth table referred to in Article 68 can be rectified or modified unanimously.

These values ​​can be adjusted or modified, even in the interest of a single condominium owner, with the majority provided for by article 1136, second paragraph, of the code, in the following cases:

1) when it appears that they are the result of an error;

2) when, due to the changed conditions of a part of the building, as a result of superelevation, increase of surfaces or increase or decrease of the real estate units, the proportional value of the real estate unit is also altered by more than a fifth only condominium. In this case the relative cost is borne by the person who gave rise to the change.

For the sole purpose of revising the proportional values ​​expressed in the thousandth table attached to the condominium regulation pursuant to article 68, only the condominium in person of the administrator may be sued. He is obliged to inform the assembly of condominiums without delay.

The administrator who does not fulfill this obligation can be revoked and is required to pay compensation for any damages.

The rules referred to in this article apply to the rectification or revision of the tables for the distribution of the expenses drawn up in application of the legal or conventional criteria “.

What does this standard mean? When is a table wrong? When is it no longer current?

For the hypothesis contemplated by number 1 of the standard, reference should be made to those cases in which the technician in charge made a mistake in drawing up the thousandth tables.

Please note: the application of coefficients, their gradation, except for macroscopic oversights, cannot be considered an error, but the discretionary choice of the professional in charge of drawing up the tables.

What is certain is that the incorrect use of a coefficient (eg of floor height rather than of destination) certainly brings an error.

For the second case, think of that condominium that has closed a part of the terrace level transforming it into a veranda. In these circumstances, if the changed conditions of the building have changed the original value of the real estate unit by at least one fifth, the revision can be started with majority approval (and expenses for those who caused that variation).

How can tables be reviewed?

First of all, the assembly is the body in charge of the evaluation of the case and the approval by a majority of the modified tables for the reasons set out above.

The alternative is the judicial action that tends to obtain through the provision of the magistracy (sentence), of the new tables.

In the cases identified by the art. 69 avail. att. cc it will not be necessary to sue all the condominiums, as it is sufficient to summon the administrator, who will have to report to the assembly of the dispute.

The judicial action in question, pursuant to the combined provisions of Articles 71-quater c.c. and 5, paragraph 1-bis, Legislative Decree no. 28/2010 must be preceded by the obligatory mediation attempt.