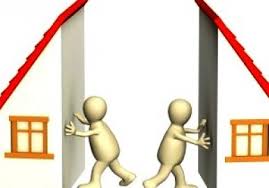 In large condominium reality, it comes the need by the owners themselves to divide the total by all, to create distinct and separate condominium units, more flexible and therefore easier to organize and manage.

The dissolution of the condominium is governed by Articles 61 and 62 of the implementing provisions of the Civil Code.

When a building or group of buildings belonging to floors or portions to different owners can be divided into those that have the characteristics of autonomous buildings, the condo can be dissolved and the co-owners of each party may form a separate block.

The dissolution is decided by the majority required under the second paragraph of Article 1136 of c code. (Resolutions approved with a number of votes constituting a majority of those present and at least half of the value of the building), or ordered by judicial authorities at the request of at least one third of the joint owners of that part of the building are valid which calls for the separation.

The provision of the first paragraph of the preceding Article applies even if they remain in common with the original participants some of the things mentioned in Article 1117 of the c code.

If the division can not be implemented without changing the state of things and works are needed for the different arrangement of the premises or dependencies among the owners, the dissolution of the condominium must be approved by the majority prescribed by the fifth paragraph of Article 1136 of c code. (The resolutions referred to in Article 1120, first paragraph, and in Article 1122-bis, paragraph must be approved by the Assembly with a number of votes constituting a majority of those present and at least two-thirds of the value of ‘ building).

The conditions required for the dissolution of the condominium, under the first paragraph of Article 61 disp. att. c. c. I’m:

– That the condominium object of dissolution consists of a building or group of buildings belonging to floors or portions to different owners;

– That such building or group of buildings can be divided into those that have the characteristics of autonomous buildings.

It is therefore a right exercisable on condition that there is autonomy of the buildings, to be understood “according to case law” in the structural sense, it is therefore possible that the separation is real autonomy in purely administrative.

Under Article. 61 disp. att. Civil Code, and paragraph two of Article 62 disp. att. the commercial code, the dissolution may also be only partial, it can take place even if they remain in common with the original participants some of the things mentioned in Article 1117 of the Civil Code.

Type autonomous manufactured from a structural and static point of view, since the entire building from the ground floor to the top floor, with autonomous systems of services (electricity, heating, water supply, sewage) and free of penetrations of other common or individual property, despite the permanence of fellowship with the original owners of some former goods art. 1117 Civil Code, including the door and the entrance hall, a courtyard, and the sewage system of rainwater disposal “.

If the condo can not be divided without changing places, local or dependencies, paragraph two article. 62 disp. att. cc It requires that the condominium dissolution must be approved by the majority laid down in paragraph five of Article. 1136 of the Civil Code (A majority of those present and at least two-thirds of the value of the building).

The dissolution can be placed by the judicial, at the request of at least one third (based on the number of members and not on the value represented by each share) of the joint owners of the building or of that part of the building applied for the separation .

The melting has the following effects:

– Ex art. 61, paragraph 1, disp. att. the commercial code, the owners of each share resulting from the dissolution may be formed in a separate apartment building; it is an effect that occurs ipso jure, does not seem so necessary to a memorandum to that effect;

– The regulation of use of any residual things in common art. 62 paragraph 1, disp. att. cc, may be subject to special regulations regarding expenses and related charges, alternatively and in a residual it remains active discipline of Articles 1117 et seq. commercial code .; in any case the expenses that will affect these common things left after the dissolution remain the original unitary assembly expertise.