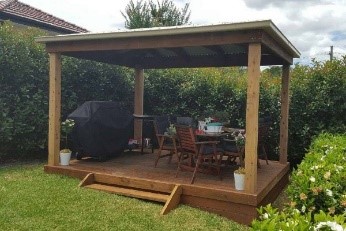 It is not always easy to establish the border between free construction and buildings that require the permission of the City, that is, the so-called construction permit, so as not to be considered a building abuse, and therefore not to undergo a demolition order

Problems arise, above all, for pergolas, gazebo, canopies, canopies and, more recently, pergotende, as works of limited consistency, whose impact on the territory is generally modest. As long as, for these works, you can proceed without having to ask for permission from the municipal administration (so-called free building) or by simply submitting a notice of initiation, and in which cases, the building title is required (permission to to build)?

Often the discipline is contained in the municipal building regulations, from which it is also possible to check whether there are particular landscape constraints to be observed.

This issue has recently been addressed by the State Council with a clearer judgment (Cons. St. 306/2017 dated 25.01.2017) as it defined when, in addition to the cases of the pergola and the veranda, you must ask for permission to the City for the gazebo.

Gazebo: what is it?

The gazebo, in its typical configuration, is a light structure, which does not adhere to any other property (hence, for example, not resting on one of the walls of the building).

The gazebo is covered at the top and is, instead, open to the sides.

It is usually made of a wrought-iron structure, aluminum or structural wood, sometimes closed to the sides of easily removable curtains.

Often, the gazebo is used to set up outdoor events, even on public land, and in these cases is considered a temporary structure.

In other cases the gazebo is permanently created for the best use of open spaces such as gardens or large terraces.

There is therefore no gazebo when the materials used are not all light, and if the structure was made in adherence to a pre-existing masonry building.

Gazebo, does it want permission to build?

According to the case-law, the gazebo needs permission to build when its purpose is not temporary and precarious (the case where it is set up only for a limited period of time, for example, for a reception).

The Tar Molise (Tar Molise Campobasso, sent n.353 / 2016, see also Tar Naples, N ° 2282/2016: “Incomplete artifacts, as they function to meet permanent needs, must be considered fit to alter the state of the places, resulting in an increase in the urban load, without notice their possible structural precariousness, the removability of the structure and the absence of masonry works (such as, for example, gazebo or kiosks). In this sense, the work – which exempts the requirement of permission to build – postulates a specific and temporally limited use of the good, while the precariousness of the materials used does not exclude the intended use of the product to satisfy unusual and contingent needs but permanent over time which the same is attributable to the hypothesis provided for in paragraph e.5) of paragraph 1 of art. 3, D.P.R. n. 380 of 2001 – including new buildings, installations of light artifacts, even prefabricated, and structures of any kind that are used as dwellings, working environments, or as stores, warehouses and the like, and which are not intended to meet merely temporary needs “) said that the gazebos which are not precarious but functional to meet permanent needs should be considered artefacts altering the state of the sites, with a sure increase in urban load.

It does not detect the structural precariousness of the article (ie the use of light materials), the removability of the structure and the absence of masonry works, since the gazebo is not precarious for use for contingent purposes but is destined for a use to meet long-lasting demands and strengthened by the permanent and non-seasonal nature of the activity being carried out.

Only the precarious gazebo does not require permission to build.

It is the “precariousness” of the work that exempts from the obligation to ask for permission to the Commune, it needs a specific and temporally limited use of the good.

Different is the case of seasonal use, which implies that the manufaturant is responsible for satisfying non-exceptional and contingent needs, but permanent over time; in the latter case, the gazebo is considered a “new construction” (and therefore requires a building permit), even if it is lightweight, prefabricated, and any kind of structure used as housing, working environments or as storage, warehouses and the like, and that they are not intended to meet purely temporary needs.

The Cassation is also on the same line (Cassation No. 35481/2016): in the case of building in order to be taken away from the prior permission to build a manufactured article for its alleged precarious nature, it can not to be deduced from the temporary nature of the subject subjectively given to the work by the builder, but must relate to the intrinsic material destination of the work for a truly precarious and temporary use for specific purposes, contingent and limited in time, resulting in subsequent and urgent elimination, However, it is not sufficient to remove or land anchorage.

(This is particularly the case where the Court considered the abusive realization of six small artifacts, some constructed on a reinforced concrete base, others on flat pedestals, used as a dwelling, having a bedroom, a bathroom, a living room, a gazebo and a fence).

The Tribunal of Rome (Tribunal Roma, No. 3216/2016) considered the offense of building abuse in the case of construction, in the courtyard, of a wooden gazebo, fixed on the ground and unmovable, since it was an extension subject to permission to build.

Instead (Tar Catanzaro Tar Catanzaro, No. 7/2016) said that the installation of a gazebo that is a pertinencial element with a volumetry of less than 20%, for the small structural and dimensional characteristics is not such that have a significant urban impact and therefore can not be subject to respect for distances or permits to build.