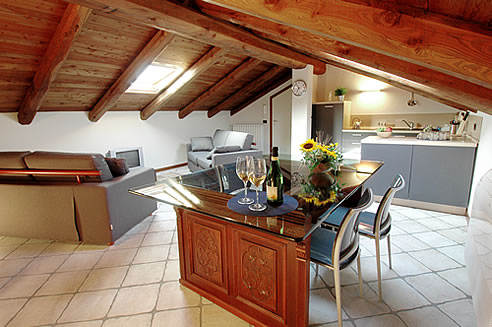 Do you want to live in the attic? Permission to build is required (and not the simple SCIA)

Do you want to live in the attic? Permission to build is required (and not the simple SCIA)

You need a Building Permit and not a simple SCIA, to change the intended use of a room, originally classified as an attic.

The case. The company that owns and carries out the building works and ancillary works involving the change in the intended use of a real estate unit, originally classified as an attic-laundry-drying room, for residential use, was sentenced to the demolition of the same works and to restoration of the initial state, because carried out illegally, in the absence of the prescribed building permits.

Even in the presence of a tenant occupying the property, deemed jointly responsible for the offense, the demolition sentence is imposed on the owner company alone, beyond its actual or presumed responsibility for the commission of the building abuse, as it is the only one subject in possession of the power to effectively remove the abuse, even if not directly responsible.

The interventions involved a systematic set of ancillary works aimed at making the environments habitable and usable in all respects and therefore radiators, gas system, electrical system, TV and telephone sockets were installed and a toilet with shower and an external boiler compartment were installed. ; the rooms that the original Building Permit had been destined to attic, washroom and drying room, have been transformed into an apartment with kitchen, living room, bathroom, double bedroom and technical room on the open side.

The offense and the sentence. On the basis of the provisions of the Lazio Regional Administrative Court (ruling no.9074 of 13 March 2018), what was achieved was subject to a regular Building Permit.

The appellant challenged the TAR’s decision stating that for the change of intended use, where it did not involve a change in the building category, a SCIA would have been sufficient and that, in the event of an omission (as happened among other things), it would be a pecuniary sanction was sufficient and not a demolition order.

The TAR first of all highlights how the mere construction of technological and sanitary systems confirms a change in intended use and, as provided for by art. 33 ( Building renovation interventions in the absence of a building permit or in total discrepancy ) of Presidential Decree 380/2001 ( Consolidated Building Act ), must be removed or demolished; being in the presence of building works carried out after the completion of the building and during its existence, there is in any case a hypothesis of building renovation (as defined by Presidential Decree 380/2001, art. 3, co. 1, lett. d) and therefore the creation of a building organization in whole or in part different from the previous one which must therefore be subject to the prior issue of the Building Permit and to the payment of the construction contribution due for the different destination.

However, the limitation to those properties falling within the homogeneous zones A) must not be misleading, which would lead to understanding the properties located outside the zones A) as exempt from the PdC, even if only for the change of intended use; the coherent interpretation of the rule, declares the TAR, leads to the belief that the legislator refers to “compatible intended uses” (as reported by the same in art. 3, co. 1, lett. c of the TEU, relative to the typology restoration and conservative rehabilitation). Specifically, art. 3 highlights among the building interventions:

Building renovation interventions, as well as those of extraordinary maintenance, restoration and conservative rehabilitation, always require a Building Permit, if they involve a change of intended use between categories that are functionally autonomous from an urban planning point of view.

Another important point, according to the TAR, is the change of intended use which can be considered, to all intents and purposes, urbanistically relevant: the transformation of an attic (intended as a wash house and drying room, in this case), which originally presents the characteristics of an accessory or pertinent compartment (such as a garage, a cellar, a service room) and therefore not comparable, by the current urban planning instrument, to a residential area at the time of the release of the original PdC, in a room habitable, it is configured as an extension of the residential area and its volume.