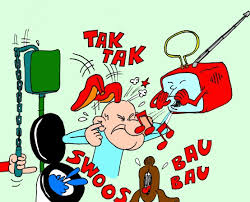 Screams, noises of furniture and heels in a condominium: when does rudeness become a crime?

Screams, noises of furniture and heels in a condominium: when does rudeness become a crime?

Disturbance to the peace and the rest of the people: how many people must suffer the disturbing noises in order to integrate the crime?

Even if the condominium regulation does not provide for bands of silence or other specific rules that regulate the peaceful coexistence between neighbors, all tenants are required to respect the provisions of the law that prohibit disturbing the public peace.

Screams, noises of furniture and heels in a condominium can lead to a crime and, to be precise, in the criminal hypothesis referred to in art. 659 of the Criminal Code, according to which anyone who, through noises or noises, or abusing sound instruments or acoustic signals or still arousing or not preventing clamor of noise, is punished with arrest for up to three months or with a fine of up to 309 euros. animals, disturbs people’s occupations or rest.

According to the Court of Cassation ( order no.36329 of 25.09.2020 ), to prove that the tenant on the upper floor disturbs the rest, the testimony of a few other condominiums who declare, before the judge, to perceive the noise, is sufficient caused by the defendant. In practice, the Court of Cassation seems to remind us that sometimes even rudeness becomes a crime .

Let’s see in more detail what the supreme judges ruled.

Condominium noises: the case submitted to the Supreme Court

A woman was appealed to the Supreme Court who had been sentenced to a fine of 150 euros for having repeatedly caused disturbing noises inside her home, so as to prevent the night rest of condominiums residing in her own building.

According to the defendant’s defense, the criminal responsibility would be unfounded because the noises caused were perceived exclusively by the tenants of the neighboring apartments and not by an indeterminate number of people , even if only other subjects living in the same condominium had been.

For a long time the contested criminal offense could not be considered complete but, at the most, since it is a disturbance to the neighbors, a conduct generating mere civil liability (intolerable immissions pursuant to art. 844 of the civil code).

Alternatively, the accused complained of the failure to grant the cause of non-punishment due to the particular tenuousness of the fact pursuant to art. 131-bis of the Criminal Code due to the non-habitual nature of the conduct and the negligence of the offense.

Disturbing noises in a condominium: the decision of the Supreme Court

The Court of Cassation, with the ruling in question, declares the appeal inadmissible, thus confirming the conviction of the accused.

As regards the first reason for complaint, namely that the noises would have been perceived only by the tenants of the neighboring apartments, the Supreme Court recalls that, in order to integrate the offense referred to in art. 659 of the Criminal Code, since it is a crime of danger , the aptitude of the sound sources caused by the agent to be affected by a plurality of subjects is sufficient , a fact that has been promptly ascertained on the basis of the univocal statements of the three witnesses examined, from which it emerges that the dragging noise of the furniture and the screams coming from the defendant’s apartment prevented the rest not already personal but of the condominiums, and the night time in which they were produced by the latter.

As stated by the practically unanimous jurisprudence of legitimacy ( ex multis , Cass., Section 3, sentence no.18521 of 11/01/2018), so that the infringement referred to in art. 659 cod. pen. it is necessary that the noises produced, in addition to being higher than normal tolerability , have the aptitude to propagate in such a way as to be capable of disturbing an indeterminate plurality of people.

It follows that if the disturbing activity takes place in a condominium building , in order to recognize the criminal responsibility of the agent, it is not sufficient that the noises disturb or are capable of disturbing the peace and occupations of the inhabitants only, the lower or upper apartments with respect to the source of propagation, but a situation of noisy emissions that are suitable, as ascertained in the present case, is required to disturb a more consistent part of the occupants of the same building, in which case the compromise of public peace must be considered integrated.

Moreover, it is hardly necessary to remember that, according to a very recent sentence of the nomofilactic judge (judgment of 9 October 2020, n.33708), it is sufficient that the disturbing noises are heard even by three condominiums alone in order to integrate the crime referred to in ‘art. 659 cp

According to the sentence cited most recently, « for the purposes of configuring the offense pursuant to art. 659 cod. pen. neither the vastness of the area affected by the noise emissions nor the disturbance of a significant number of people are necessary, as it is sufficient that the noises are capable of disturbing an indeterminate group of people, even if gathered in a restricted area, such as a condominium “.

Nor, on the other hand, can it detect the fact that only some of the subjects potentially injured by the noise emissions complained about it; this eventuality does not exclude the configurability of the crime when it has been ascertained, as did the first instance judge, the suitability of the same to disturb not only a single but an indeterminate group of people , such as the inhabitants in the same condominium , with the consequent impact of the conduct on public tranquility and the damage to the interest protected by the provision, which is constituted, in fact, by public peace and tranquility.

Troublesome noises: the exclusion of punishment due to particular tenuousness of the fact

Regarding the failure to apply art. 131-bis of the Criminal Code on the exclusion of punishment due to particular tenuousness of the fact, the Supreme Court considers the request made by the accused inadmissible as this complaint had not been brought before the trial judge.

The Court of Cassation rightly recalls that requests that do not appear to have been previously addressed to the trial judge cannot be carried out before the Supreme College, called to check the legitimacy of the contested sentence, without however being accompanied by the specification of the reasons legitimizing the recognition of the cause of non-punishment.

In any case, with regard to the question of the applicability or otherwise of art. 131-bis of the Italian Criminal Code to the offense pursuant to art. 659 of the Criminal Code, it is hardly necessary to recall that the jurisprudence of legitimacy (Criminal Court, sentence no.36317 / 2019) has abstractly considered the exclusion of punishment for particular tenuousness of the fact to be applied to the crime of disturbing occupations or rest of people if the harassing conduct of the accused ended in a single and isolated incident.

In practice, it is possible to apply art. 131-bis of the Italian Criminal Code to the crime referred to in art. 659 of the Criminal Code, provided however that it is ascertained that the disturbance to peace does not represent a habitual conduct, that is, that it has not lasted over time.